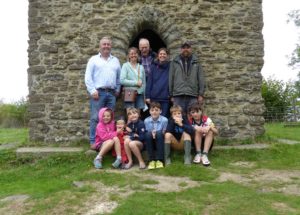 On 3 September 1939, Ken Davies set out on his ninth birthday to walk with his family from their home in Wistanstow to the landmark tower of Flounders Folly.

The route was so hilly that Ken didn’t make it all the way that day – also the day World War Two was declared – but he finally made it to the top on 3 September 2018, his 88th birthday!

“I say it’s taken me 79 years to get here,” joked Ken after walking to the folly and then climbing the 78 steps to the top of the turret.

In 1939, Ken’s grandfather was the tenant at Church House Farm, Wistanstow, but, shortly after, the family moved first to Bromsgrove and then to Ledbury, where they now run the Woodside Lodges Country Park.

Ken never made it back to complete his walk to the folly, but his family arranged for him to do so as a birthday surprise. His daughter Emma said: “He has been talking about going to the folly for a long time now, to re-visit it with his grandchildren who are now a similar age to what he was then.”

So with the help of the Flounders Folly Trust, Ken and 10 younger members of the family finally made to the tower today and climbed to the very top. While the views were restricted by cloud, the memories of a special day will stay with the family. Many congratulations to Ken!